IJKA - Bulgaria is the official representative for Bulgaria of INTERNATIONAL JAPAN KARATE ASSOCIATION (IJKA), whose aim is the study and distribution of Traditional Karate in harmony with traditions bequeathed by Shoto (Gichin Funakoshi). IJKA - Bulgaria is a department of the Bulgarian Federation Shotokan Karate-Do.

Shotokan Karate Do we are practicing in our department is based on the ideas and principles taught by Tetsuhiko Asai Sensei and Sadashige Kato Sensei.

The International Japan Karate-Do Association (IJKA) was formed in 1990 with Tetsuhiko Asai Shihan (1935 - 2006) as World Chief Instructor and Sadashige Kato Shihan (1943 - 2020) as European Chief Instructor. While still a mainstream ‘Shotokan’ organisation it also promotes Asai Sensei’s unique style of karate and Kato Sensei's new technology and aplications. While it was Asai Shihan’s unbelievable ability to demonstrate his style, it was and is, Kato Shihan’s ability to interpret and teach that has seen the organisation grow and gain popularity with the karate instructors who are still hungry for knowledge.

At the 2007 IJKA congress held in Budapest, Hungary following one year of respect for Asai Shihan, Kato Shihan 9th dan was asked to take over the mantel of World Chief Instructor. According to Japanese tradition, one year after the passing of Kato Sensei, IJKA resumed its activities. The new structure of the organization according to the will of Kato Sensei is as follows:

Sensei Latchezar Nenov, Director of the Technical Committee of IJKA

Sadashige Kato Sensei has lived in the United Kingdom and taught karate around the world for more than 50 years. His unique teaching style and his attention to the historical details of Shotokan karate, on the basis of which the new technologies developed by him rested, made his coaching seminars mandatory for every Shotokan karateka. Today, these seminars are led by his longtime students. For the past 20 years, Kato Sensei's desire has been to train highly qualified European instructors. Thus, he developed his instructor program, which was implemented through a five-year intensive course for international instructors. We can be proud that three Bulgarians (Latchezar Nenov, Anton Vandev and Milena Galabova) have completed this course and are certified international instructors of IJKA. IJKA membership offers karate-ka the opportunity to travel around the world, compete, attend seminars held in other clubs and countries, exchange experiences and learn from IJKA's top instructors. 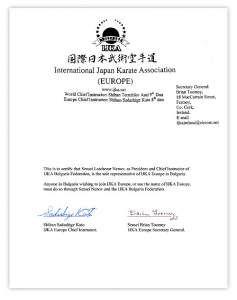